When politics relates to the local community, the community responds and the power of that community is unleashed. That’s what this book, this story, is about: what a politically active community can do. In northeast Victoria we call it the Indi way.

A self-declared political novice, Cathy McGowan first came to national attention with her surprise win as an independent in the north-east Victorian seat of Indi in 2013.

Backed by a well-organised, if somewhat unconventional, grassroots campaign, her win of a seat held by the Coalition for 74 years inspired future political campaigns, from Kerryn Phelps in the seat of Wentworth, to Zali Steggall’s Warringah upset.

For the first time since retiring from Federal Parliament, McGowan shares the story of her remarkable ride to the nation’s capital.

From her childhood on a rural Victorian farm in a large family of 13 children, to her dedication to the land, farming life and education, McGowan paints a picture of a life committed to her community and to genuine change.

Part memoir, part community organising guide, Cathy Goes to Canberra offers a glimpse inside McGowan’s grassroots campaign, sharing in detail how thousands of ordinary people got together, organised themselves and amplified their voices. She explains how the campaign, which started around people’s kitchen tables, worked to harness people’s best selves, radically altering the political terrain and forging a path for others.

Cathy Goes to Canberra is an inspiring tale and a primer for other communities and individuals looking to create meaningful change.

What they're saying about Cathy Goes to Canberra

Add these other books to your bookshelf 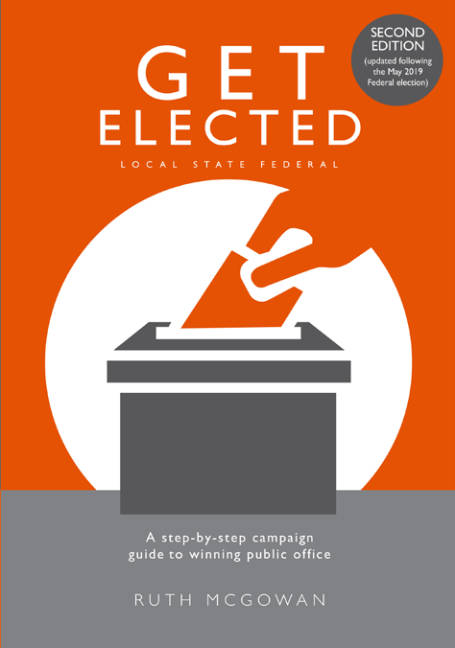 Get Elected: A step by step campaign guide to winning public office

Disillusioned with politics? Be the change you wish to see. Run for office and Get Elected! With more than 7,400 opportunities across Australia to run for office, what are you waiting for? Stop hoping politicians will act; become one.

Written by Cathy’s sister, Ruth McGowan, and updated following the May 2019 federal election, Get Elected is full of tips, advice, case studies and checklists to get the aspiring candidate on the campaign trail and into office.

Get the advice you need on planning when and where to stand, building your team and campaign, communicating with purpose, mastering the election trail and more.

Coming soon, a new book from Voices for Indi about the campaigns that reshaped local democracy...

The people of Indi will also be telling their story on the political movement that started with the formation of Voices for Indi in 2012. Over the course of campaigns that elected independents to the federal parliament in 2013, 2016 and 2019, they created and enabled a form of community grassroots power that was channeled across the electorate, and beyond.

A compilation book is in the pipeline, telling the story of the people, the grassroots movement and the election campaign that dared to challenge existing power structures.

Recounted from the perspective of the people and communities of Indi who were there on the ground in 2013, 2016 and 2019, the book explores how a group of ordinary people changed the style and substance of their political representation; of how and why they signed on and turned up, and why others may follow in their footsteps.

It is hoped that the book will be published in mid-2021.