In 2013, Cathy McGowan broke the Liberal/National Coalition’s hold on the seat of Indi, becoming the first independent member for the north-east Victorian electorate and the first female independent to sit on the parliamentary crossbench.

Her successful grassroots campaigns sparked nationwide interest in the potential of community-based, independent politicians to chart a new course for Australian democracy, demonstrating that when politics relates to a community, the power of a community is unleashed.

During her two terms as a politician, from 2013-2019, Cathy worked in Federal Parliament to develop policy around regional development, a national integrity commission, a code of conduct for politicians, and drought policy.

In 2019, Cathy was again part of Australian political history, supporting the winning campaign of – and handing the political baton on to – Indi’s second female independent member, Dr Helen Haines.

Cathy was awarded The Accountability Round Table award for political integrity in 2019, and is also an Officer of the Order of Australia and a Churchill fellow.

She lives very contentedly on her hilltop farm in the Indigo Valley in north-eastern Victoria and is now on a different campaign trail, encouraging others to turn up, speak up and step up to leadership. 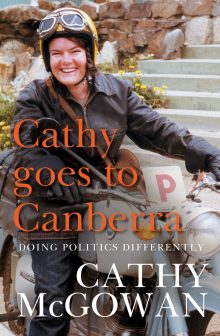 A self-declared political novice, Cathy McGowan first came to national attention with her surprise win as an independent in the north-east Victorian seat of Indi in 2013.

Backed by a well-organised, if somewhat unconventional, grassroots campaign, her win of a seat held by the Coalition for 74 years inspired future political campaigns, from Kerryn Phelps in the seat of Wentworth, to Zali Steggall’s Warringah upset.

For the first time since retiring from Federal Parliament, McGowan shares the story of her remarkable ride to the nation’s capital.

From her childhood on a rural Victorian farm in a large family of 13 children, to her dedication to the land, farming life and education, McGowan paints a picture of a life committed to her community and to genuine change.

Part memoir, part community organising guide, Cathy Goes to Canberra offers a glimpse inside McGowan’s grassroots campaign, sharing in detail how thousands of ordinary people got together, organised themselves and amplified their voices. She explains how the campaign, which started around people’s kitchen tables, worked to harness people’s best selves, radically altering the political terrain and forging a path for others.

Cathy Goes to Canberra is an inspiring tale and a primer for other communities and individuals looking to create meaningful change.